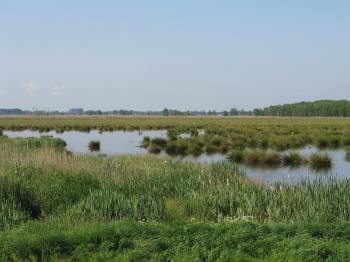 Masses of Mute Swans and breeding Common Terns here. More Garganey and Bearded Tits here, giving very good views. A White-tailed Eagle flew in and perched in the row of trees. Warblers seen and heard included Sedge Warbler, Great Reed Warbler, Reed Warbler, Marsh, and Savi’s. On the way back to the car a Crane and another Sea Eagle flew in. A couple of White winged Terns flew by calling.

In the afternoon went to Klotzow polder. This was an eventful journey through country roads adding Whinchat, a pair of Hobby, Buzzard, Honey Buzzard, and Sea Eagle. Also Wood Warbler, and heard a Willow Tit.

At Klotzow two White-tailed Eagles flew past, mobbed by Lapwings, a few White winged Terns here, and a Rosefinch was singing from a bush at the end of the track.

Early evening visit to Menzlin polder, looking for the Barred Warbler but faied to find any. However, a lot of birds to see. An Osprey flew over and other raptors were White-tailed Eagle, Red Kite and Honey Buzzard. Also seen were Marsh and Savi’s Warbler, Bearded Tit, Whinchat and Thrush Nightingale. A Quail was calling near the car park.
Evening visit to the Polder Gorke. It was only a short visit, More time would no doubt have resulted in a lot more birds. Red Kite, small groups of Black Tern, Crane, Wigeon and Pochard here.

1 June
Left at 8.15 for Usedom island, aiming for Peenemunde. Well over an hour to get there. Some quite good open fields on the islands with raptors – Buzzards, Red and Black Kite, and a White-tailed Eagle. A lot of pine forest along the coast and areas of mixed woodland, but not many birds, and nothing apart from Herring Gulls on the coast. Near Wolgast was a hilly and sandy area with a lot of tall bushes. A big parking area was near a mobile soup kitchen. On the hill were Red backed Shrikes and a Barred Warbler in repeated song flight. A White Stork circled overhead.

A second visit to Klotzow polder in the afternoon. Whinchat and Red-backed Shrike near the car park. In the damp woodland on the left was a and a Lesser Spotted Woodpecker giving excellent views. Two Eagles flew out of the polder, again chased by Lapwings. Also Marsh Harrier, Black and White Winged Black Terns on the south side. Garganey, Shoveler, Teal, Bearded Tits and Rosefinch singing from the trees at the end.

Decided then to look at the polders around Bargischow, east of Anklam. The road to there out of Anklam was dire. It was mostly teeth rattling cobbles. After Bargishow and towards Kamp there was some smooth road followed by concrete blocks. This was worse and I almost gave up. The meadows here were very quiet and looked very uninteresting. There was some work going on here which appeared to be restoration of the Kamp

polder. (see photo) Some new dykes were being constructed. Close to here was a large stretch of water with very few birds – some Bearded tits, a Common Tern, and a single Black necked grebe. A Cormorant colony was in the distance.

Johannishof 6.30 to 7.30 pm, hoping for crakes, but no luck. 8 Garganey, Marsh Harrier and 2 White-tailed Eagles. Red Kite and 3 Redshanks.

Decided then to visit Ahlbeck Seegrund on the way to Schwedt. This is a former inland sea which was drained 150 years ago for stock rearing. There was some very nice woodland with mature trees and Golden Oriole and Redstart were added to the list.

On the way to Schwedt I stopped near Teerofen Brücke. In the woodland were Wood Warbler and Spotted Flycatcher. Along the track to the north of Teerofen bridge were singing Thrush Nightingales. A Black Woodpecker flew across in the open between some trees. I met a German Birdwatcher ( who was driving his Trabant).

He told me that he had found singing Aquatic Warbler near Schwedt, and gave me directions.

A lot of Yellow Wagtails and several calling Corncrakes. One actually flew a yards. A Black Tern flew by. Good views of Sedge Warblers. After 30 mins I heard an Aquatic Warbler singing. The song started with some churring and whistles. I did not see the bird but its identity was confirmed by a German birder who joined me.

Returned at 7.15 and stayed till 8.30 pm but did not hear any song this time. The National Park warden arrived with a small group to mark out the Aquatic area with posts.

3 June
Decided on a last effort to see the Aquatic Warbler and went to the polder between 6.0 and 7.0 am. It was very dull and all that was singing were Sedge Warblers and about 4 Corncrakes. 2 White Storks circled around.

Brief visit to Felchow See, but there was drizzle +. On the main lake there were about 10 Goldeneye, a Garganey and Black-necked Grebe.

On the way to Berlin I turned off the 11 at Bernau for a brief visit to Schönowerheide. It is obviously a popular walking place at weekends (today was Sunday). It is an old military range with signs warning people not to stray from the track. It is now a heathland area with scattered Scots pines. Within only a couple of hundred yards I found Tree pipit, Woodlark and Crested Tit and Golden Orioles were singing from the woodland the opposite side of the main road.

Next stop Schönefeld airport for the flight home.