Tuesday 11 October.  Afternoon flight from Bristol to Berlin by 8 members of the Bristol Ornithological Club

Wed 12 October
Semlin.  Tree Sparrows and Swallows outside the hotel. Single  The first Bean Geese flew over. At the nearby lake Bearded tits calling. GC grebes and a distant Black-necked Grebe. On the way to Nennhausen there were 50+ Buzzards, one of them almost pure white. 4 Rough-legged Buzzards, 4 Hen Harriers and several Red Kites. A single Great Grey Shrike on a post near the main hide at Buckow and 6 Great Bustards.

Then back towards Rhinow via Rathenow. The first flocks of Geese (500+ Bean and White-fronted) were feeding in a field just past Graningen.Another Shrike at the pump house on the north side of Gulper See. Five immature White-tailed Eagles seen from here.  All  Stopped briefly at the hide near Havelberg where there was another Great Grey Shrike, and some distant Cranes.
Black Redstart on roof of Havelberg Cathedral. Left there at 6.0 pm and stopped to watch large flocks of Cranes flying to roost.
End of day score 56 species.

Thursday 13 October
Headed to Parey. Along the road were a lot of Meadow Pipits and White Wagtails, some Skylarks and 2 or 3 Corn Buntings. Near the track to the tower hide between Parey and Gulpe was a small pond with a couple of Wigeon, some Teal and and a Gadwall. Hen Harrier and Red Kite around. In the area south of the lake  a huge flock of Cranes were seen. Also a single Eagle, and along one of the drains some Shoveler and brief views of Bearded Tits. Along the south shore of Gulper See was a mixed flock of Yellow Hammers and Chaffinches. From the main hide overlooking the lake  there were hundreds of geese. Grey Lags, Whitefronts and Bea 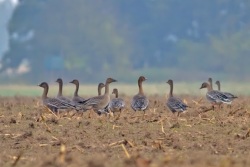 n Geese in equal numbers, only a single Pintail among the large flock of mixed duck. A few Dunlin and Ringed Plover along the shore. In the woodland were Crested and Coal Tits, and Bramblings. Further east along the shore were thousands of geese, and 7 Great White Egrets.

Then, a short diversion to a new site – Dreetzer See  The lake itself was disappointing but a male Hen Harrier on the way there and a Lesser Spotted Woodpecker in the trees on the south side of the lake made the diversion well worth while.  Headed for Lubben for the next night.

Friday 14 October
A morning walk along the fishponds from the sluice towards Schlepzig. A Black Woodpecker called and flew across the path. Long-tailed Tits, a lot of Siskins and a couple of Chiffchaffs.  Good numbers of Pochard and Goldeneye on the ponds. Total species count for the 2 1/2 days was 81.

Back to Schoenefeld airport for the 1350 return flight to Bristol