Then a visit to the Elbe near Kietz. Extensive flooding beyond the dyke. Red and Black Kite, White Stork and large numbers of Pintail and other wildfowl.

Then further west to Klein Schmölen Dunes, Single Redpoll here by the car park. Took the path towards the look out with views right over the plain below. Pair of Woodlarks on the slope of the dunes. Siskins in the trees. Als

o in the woodland were Black Woodpecker, Crested Tit and Treecreeper, Hen Harrier in the wet meadows below the hill.

31 March 7.0 am pre-breakfast walk – again over the Löcknitz river, Added Firecrest in a hedge, Dunnock (a rarity for me in Germany). Also a very close Great Grey shrike, large numbers of Fieldfares and our only Pheasant.

After breakfast took the road towards Wittenberge to the Gadower forest looking for Middle Spotted Woodpecker near the Gaststadt Unter den Linden, but failed. Brambling added to the list, Crested Tit and Short-toed Treecreeper. On towards via the Stepenitz river where there was a pair of Goosander. 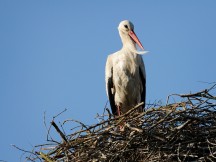 At Rühstädt, the Stork village, a lot of Storks were at their nests on the houses. On the return journey east, a stop at the tower between Havelberg and Jederitz was rewarded by good numbers of water birds on both sides of the road. They included Red Necked Grebe, Smew, Goldeneye, Shoveler. White Tailed Eagle also.

From the southern shore of Gülper See were Pintail, a few Whitefronts, Red Breasted Merganser, Goosander, a pair of Smew and Red-necked Grebe. At Parey there was no sign of the Red-breasted Goose that had been seen the previous week. On the flooded fields were large numbers of Pintail and Shoveler. Also here were two White Tailed Eagles, Great White Egrets, Ruff and Snipe. On to Belzig for overnight stay.

1 April. 7.0 am walk down to the Castle area, and checked the woodland around. Added Grey Wagtail, and a group of 3+ Hawfinches seen initially feeding on the ground. Lesser Spotted Woodpecker, two more continental Bullfinches, Black Redstart and a Black Woodpecker. Red Squirrel dashing about the trees.

At Stangenhagen an Osprey was on its nest on a pole in the middle of the lake. Also here were Common Crane (160), displaying Black Kite, Red Kite, and a calling Water Rail. About an hour to the airport. 10 mile static queue on the west bound autobahn. 9.15 pm Flight to Bristol left on time.