3 May Bristol to Berlin. Then south to Lubbenau to the Kartoffelgasthaus and Pension Knidle. Nightingale singing in the hotel grounds.

4 May Black Redstart in the next door garden. Drove to the small

harbour and walked along the canal. Wooded area, and gardens. Singing Pied Flycatchers. Goldeneye on the lake. Took the road towards Lubben, and turned right just past Ragow to the damp meadows. Yellow wagtails and Black Kite here. In a marshy area with open water were Garganey, Shoveler and Marsh Harrier. Then down Krimnitzer Kahnfahrt to the bridge over the Spree, White Stork, and Great Reed Warbler, and a nice close view of Lesser 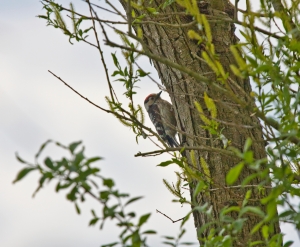 From a tower hide was an extensive area of standing water. In the distance we could see the Peregrine and Raven nests on pylons. Nearby were Great Egret, Hobby, Savi’s warbler, and Grasshopper Warbler.

In the centre of Lubben is a wood with mature trees. Lovely view of Middle Spotted Woodpecker Also Hawfinches, Treecreeper and a Red Squirrel.

Some of the ponds at Hartmansdorf had been emptied. There was Little Ringed plover some Goldeneye, Pochard, and Great-crested grebe.

5 May Morning walk at 730 to the Schloss Park in Lubbenau. Additional

birds here were Firecrest and Redstart. Also a very good view of Middle Spotted Woodpecker. Then on a dirt road through open fields between Brahmow and Papitz. A Golden Oriole flew across and was later heard calling. About half way along the road a farm track crossed it. Near here was the first of 4-5 singing Ortolan. Tree pipit also here.

Next stop to Lieberose heath. A few trees along the edge of the road beyond which was an extensive barren area with very little vegetation. Birdless except for Woodlark. More open heath at Reicherskreuz. Large hide here.

Wheatears, singing Skylarks, Tree pipits and a calling Hoopoe. On the road to Pinnow there was a Black Woodpecker. At Laszin Wiesen, near Tauer (purported to be a breeding site for Black-tailed Godwit). were Whinchat, Yellow Wagtail, and a Fieldfare.

North again and on to Burg making for Liepe, approaching it from the south east. From about 3 km before the village there were very wet rushy fields, which is a Corncrake area. (Liepe Wiesen) There were drumming Snipe, singing Grasshopper Warbler, Garden Warbler and the usual Blackcaps and Nightingales.

6 May South on the Autobahn south to J 12,and drove towards Crinitz, stopping at several lakes resulting from mine workings, including Drehnaer See. Birds included Crane and Great Grey Shrike. More Cranes at NSG Borchelsbusch. There is a tower here overlooking a large lake and extensive reeds. 6 Marsh Harriers. A Lesser Whitethroat sang nearby. Bittern booming and two Hobbies. Redshank heard. Garganey on the water.

Then to the Naturepark at Wanninchen. Approaced via Gorlsdorf. Short visit to the exhibition in the main Centre., and collected some literature. Returned along the edge of the lake. Superb views of Tawny Pipit. On the

banks below were Wheatear and Linnet, and on the water were Marsh Harrier, a group of Cranes, White-tailed Eagle and a large Sand Martin colony of in a man made bank. A group of about 12 White winged Black Tern flew in from the west, calling. The road is blocked for vehicles just after Schlabendorf. Just as we left the village a nice view of a pair of Montague’s Harrier in a field on the left hand side.

The next aim was the Gull Island at Stossdorfer See. Approached via Eggsdorf and Wilmersdorf Stobritz. Had a little difficulty in finding the best route, but were helped by the post lady. After going through the village there is a tarmac road turn on the right, signed to the Voegelinsel. It passes the lake on the left hand side. There is a small pull in on the left which gives good views of the island but a better one (as advised by the warden) further on by a small wooden hut. Parking spot here with a view from the bank.

A very large colony of Blackheaded Gull. Also some Mediterranean Gulls and Common Terns, and a single Black Tern. (they breed on the island). Met a warden who told us that Bitterns are on the east side of the lake, and also Red-necked Grebe. Two pairs of Osprey.

Then on to Schlepzig. Parked at the beech wood a (Buchenhain) From here we walked along the river to an observation tower overlooking the Spree. Not much to see here but a Black Stork flew over.

Repacked at the car park and left at 5.30 pm. About one hour to Schönefeld, for the 1910 flight to Bristol.